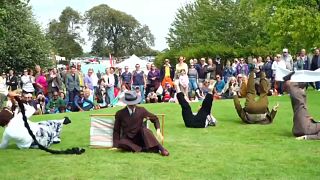 The event marked the celebration of British eccentricities. The extravagant "Chap Olympiad" saw competition participants try to outdo each other in unconventional "sporting" competitions.

It's "Britain's most eccentric sporting event" and includes sport such as "umbrella jousting", "picnic vaulting" and "cucumber sandwich discus".

In "Tea Pursuit", contestants try not to spill tea while cycling around a course and transferring a cup of tea from one rider to the next. "Umbrella jousting" involved contestants charging with umbrellas instead of jousts.

Dressed in tweed and bowler hats, the competition is meant to test the contestants' "chappish" skills.

"Absolute buffoonery, silliness and fun. It's the British at their best, I think, to be able to be light-hearted and not take things too seriously. That's what I like about it. That's what draws me to it as well and the characters and the games. I think it's fantastic," competitor Mark Gidman said.

The event was moved from Saturday to Sunday (August 11) due to high winds.