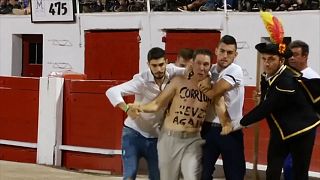 The first spectacle after the break was held on Friday at the Coliseo Balear bullring arena in capital city, Palma.

Lawmakers in Spain's Balearic Islands have banned young spectators from attending bullfights as well as the killing or harming of the animals at regional regional bullfights back in 2017, but this was overruled by a court in December 2018.

The bullfight on Friday was the first since the ban was overruled.

Around 11-thousand people witnessed the fight and were happy about the return of the Spanish tradition.

Outside the arena, however, a group of protesters gathered, holding signs and chanting slogans calling the tradition "torture".

Bullfighting and bull-related events in summer festivals remain immensely popular throughout Spain although animal rights groups have gained some ground in their campaigns.