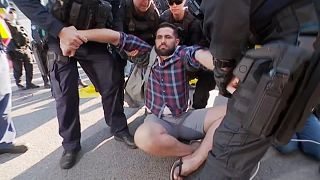 Those arrested, more than 70, faced charges including blocking traffic, obstructing police and breaching the peace.

In a Facebook post, the group said: "If you decide (to) be arrested, we thank you for your sacrifice."

The planned all-day protest is organised by Extinction Rebellion, an international group that backs a "citizen's uprising" against governments to force them to cut greenhouse emissions.

Rather than encouraging its supporters to lobby their politicians or write letters, they want their activists to disrupt society and, in some cases, allow themselves to be arrested to draw attention to their cause.