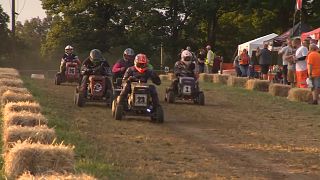 A cut above: Contestants race lawnmowers in UK endurance event

Machines sped from dusk until dawn in West Sussex on Sunday with the winning team completing .384 laps of the 1.6 km-long circuit.

The traditional Le Mans grid formation left drivers having to run to their machines as the race starts, with much of the 12 hours taking place in darkness to make it more of a technical challenge.