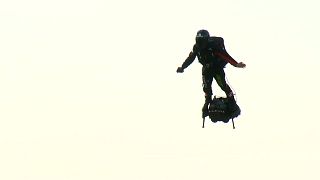 Looking like a superhero, 40-year-old Franky Zapata completed the 35-kilometre journey in 22 minutes, setting off from the French coastal town of Sangatte to land in Saint Margaret's Bay in Britain.

It was the energetic inventor's second attempt to cross the channel, after his first — 10 days ago — ended with him colliding with a refuelling boat several minutes into his flight, destroying his transportation.

Zapata, who wowed crowds during France's Bastille Day celebrations on July 14 by soaring over a military parade in Paris on the device, said on arrival that the hoverboard had reached speeds of 160 to 170 km per hour during the crossing.

The inventor received a 1.3 million euro grant from the French army in late 2018 to help finance the development of the hoverboard. This isn't the invention Zapata has been working on. He is currently developing a flying car.