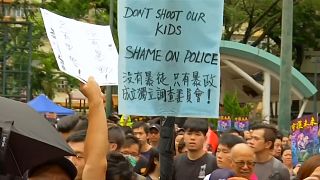 Demonstrators in Hong Kong set up barricades and blocked traffic on Saturday in the latest pro-democracy protest.

Demonstrators in Hong Kong set up barricades and blocked traffic on Saturday in the latest pro-democracy protest.

After a pre-approved rally continued past its designated endpoint, demonstrators surged through a busy tourist area by the waterfront, building more barricades and marching on a major road.

Police had warned earlier that deviations from the designated route would be breaking the law.

Many of Saturday's demonstrators wore yellow or white hard hats, and the crowds chanted "age of revolution!" and "Hongkongers, add oil!" - a popular exhortation in Cantonese.

Hundreds of marchers held posters with an illustration of protesters in hard hats tending to a young child, with the words "protect the future". Further anti-government protests were scheduled for Sunday (August 4), with activists calling for a mass strike on Monday (August 5).