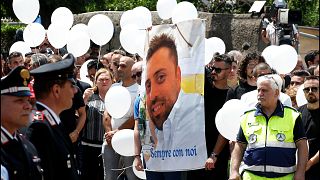 Residents of the small Italian town of Somma Vesuviana, near Naples, were in mourning on Monday (July 29) after one of their own was killed.

Thirty-five-year-old police officer Mario Cerciello Rega was stabbed to death in Rome on Friday while trying to arrest two young American citizens who were charged with the murder. Both are now in jail.

Tearful residents lined the streets as the hearse carrying the officer's coffin was slowly passing along the funeral procession route in the small town, on the slopes of the Vesuvius volcano.

The officer's funeral service was held in the same church where Cerciello Rega got married less than two months ago.

Deputy Prime Ministers Matteo Salvini and Luigi Di Maio were among the mourners.