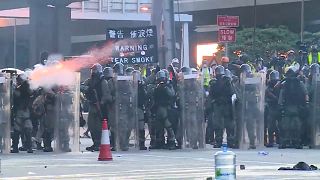 Another night of stand-offs and clashes in Hong Kong

On Sunday, a peaceful gathering in a park in the city's central business district rapidly morphed into a march, as tens of thousands of black-clad protesters set off in several directions, clogging up major thoroughfares.

As the crowds surged, hundreds of riot police with shields advanced, firing rounds of tear gas, rubber bullets and sponge grenades - a crowd-control weapon - at protesters, sending clouds of acrid, burning smoke through the streets.

The mostly young activists in hard hats, gas masks and body armour dug in, dismantling street signs and fences which they used to form makeshift barricades to slow police advances.

As riot police advanced at the end of the night from several fronts, the protesters, hemmed in and unable to see a way out, began streaming down into the Sheung Wan underground metro station.