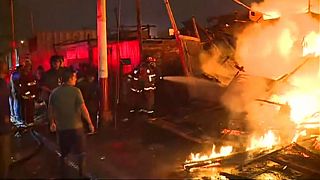 Large fire destroys up to 200 homes in Peru

A large fire that broke out in an impoverished neighbourhood in the Peruvian city of Callao destroyed up to 200 homes, firefighters and local media reported on Thursday.

According to local media, the fire started in the San Juan Bosco neighbourhood around 4 am and quickly spread because of high winds and flammable material in the area.

No serious injuries or deaths have been reported.