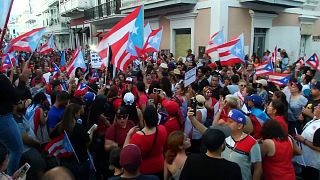 Puerto Ricans danced among the brightly coloured houses of San Juan on Thursday (July 25) after Governor Ricardo Rosselló capitulated to 12 days of protests and announced his resignation.

He told the island he would resign — effective August 2 — in the face of public anger over a corruption scandal and the release of profane chat messages.

The protests have drawn as many as 500,000 people onto the island capital's streets and protesters were not enthused over Secretary of Justice Wanda Vázquez being next in line to succeed him.

One waved a sign reading "Wanda, we don't want you either!" while another shouted, "Wanda, you're next!"

Leaders of Rosselló's pro-statehood party were scrambling on Thursday to negotiate another successor, according to three sources familiar with the talks who requested anonymity to discuss them.