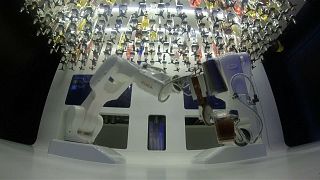 Two years after becoming the first to try a robot DJ, the five-story Karlovy Lazne Music Club has gone a step further with the launch of a robotic bartender to mix up cocktails.

Clubbers can use touchscreen terminals to order from a list of 16 mixed drinks, which is expected to grow to 50 in future.

The bartender - two robotic pincer arms, modelled after those used in car factories - stands on a small stage in a corner of the room, below a mass of liquor bottles, and can churn out 80 drinks an hour.

As the quantities served by a robot are pre-programmed, revellers no longer need to worry about being ripped off with a weak drink