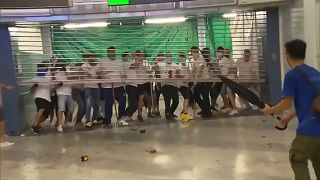 On Sunday night, men in white t-shirts, some armed with poles, flooded into the rural Yuen Long station and stormed a train, attacking passengers.

The attack came in a night of violence that opened new fronts in Hong Kong's widening political crisis over an extradition bill to send people to China for trial.

Among those attacked were protesters clad in their trademark black clothing and yellow hard hats.

The group of protesters attempted to defend themselves using a water hose and umbrellas.

Hundreds of thousands of people took part in a march Sunday to call for direct elections and an independent investigation into police tactics used during earlier pro-democracy demonstrations.