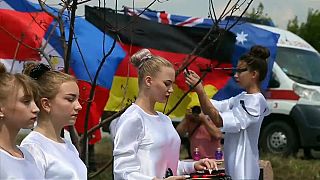 The rebel-held village of Hrabove in Ukraine's east, where a Malaysian airliner was shot down in 2014, honoured 298 victims at a ceremony on Wednesday.

Flight MH-17, travelling from Amsterdam to Kuala Lumpur, was shot out of the sky over the eastern Donetsk region during a rebellion by Russian-backed separatists, killing everyone on board. A Dutch-led team of investigators blamed Russia for supplying the surface-to-air missile that shot it down.

The incident was the deadliest in a war between Russian-backed rebels and Ukrainian forces. Major fighting ended with a peace deal in 2015, although clashes still occur.

Leader of the self-proclaimed Donetsk People's Republic, Denis Pushilin, who attended the ceremony, blamed Ukrainian forces for the downing.

The Dutch-led international team has named four suspects for the attack on the plane: three Russians and a Ukrainian.

Dutch authorities said Russia has not cooperated with the inquiry and is not expected to surrender defendants.

The Russian Foreign Ministry denied that it had not cooperated, saying on Wednesday the investigation was intended to damage Moscow's reputation.