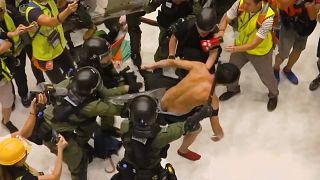 Hong Kong riot police clashed with protesters inside a shopping mall on Sunday night (July 14) as they tried to disperse tens of thousands rallying against a controversial extradition bill in the residential district of Sha Tin.

Protesters were marching in the town situated between Hong Kong island and the border with China, extending the demonstrations outward from the heart of the financial centre into the surrounding districts.

Millions have taken to the streets over the past month in some of the largest and most violent protests in decades over an extradition bill that would allow people to be sent to mainland China for trial in courts controlled by the Communist Party.