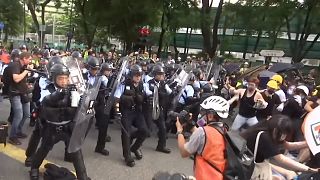 Protesters and police clash in Hong Kong after peaceful march

Clashes broke out between police and protesters at the end of a several-thousand-strong march in Hong Kong on Saturday.

Police used pepper spray and batons to disperse the crowd as fleeing protesters scrambled over each other, with some falling to the ground.

The protest started as a peaceful march against traders from mainland China, the latest in what is fast becoming a summer of unrest in the semi-autonomous Chinese territory.

After the march concluded in a park around 5 pm, many protesters began to leave. Tensions flared as some protesters obstructed police and some police began yelling and tussling with protesters, prompting many to don masks and helmets.