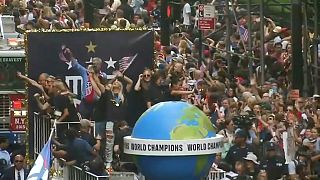 The squad's 2-0 win over the Netherlands in the final match on Sunday (July 7) capped a World Cup campaign that attracted huge television audiences and bestowed celebrity status on Megan Rapinoe, the tournament's top scorer and outspoken team leader.

The victory also called attention to the team's fight for equal pay with their counterparts on the US men's national team and, by extension, the issue of equal pay for equal work for women in general.