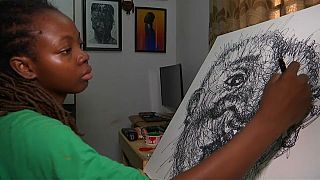 Olarinde Ayanfeoluwa has found an unusual way to express herself and create art in Lagos, Nigeria.

What starts out as distorted scribbles slowly shapes into portraits as well as cartoon and fantasy characters.

Growing up, the self-described visual artist says, she liked to draw cartoons, but in 2015 she discovered scribble art while attending an artists' workshop.

She completed a degree in microbiology last year but decided to become a full-time artist instead.

Ayanfeoluwa has worked on more than 100 scribbled pieces in the past two years. A piece takes 10 minutes to five months to complete and sells for at least $140 (€124).

Ayanfeoluwa also takes part in exhibitions to market her artwork and create awareness about the art form.