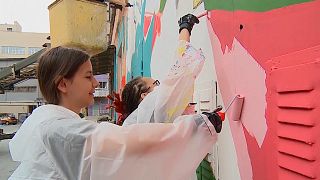 The Russian city is host to Stenograffia, the country's largest street art festival.

Do not adjust your set, this homage to YouTube is part of a street art festival in the Russian city of Yekaterinburg.

Twenty new artworks grace walls and buildings across the city, painted by artists from countries including Russia, Spain, Germany and the United Kingdom.

Now in its tenth year, the street art festival spans themes from the way art relates to social media, optical illusions to the blending of historical and contemporary art styles.

Optical illusions are a popular theme among participants of the festival.

International artists make a point of integrating local knowledge into the art they leave behind after the festival.

More than 500 street art objects have been created over the course of a decade of artists attending the festival.

This year, for the first time, three artworks from previous festivals will be restored, including two Andy Warhol inspired works that were created during the very first festival in 2010 and became popular with the citizens.

Organisers say they would like to create a catalogue of the festival objects to ensure they are protected or to document less permanent street art in the form of photographs.

After Yekaterinburg, the festival will visit 12 other cities in Russia.