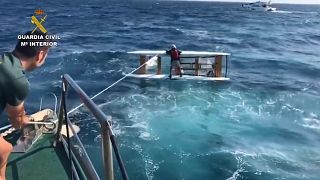 A sailor had to be rescued by the Guardia Civil after his vessel capsized.

The footage of the incident on June 28 showed the man trying to turn over the boat that had capsized due to weather conditions.

The rescuers said the man showed symptoms of daze and fatigue after he tried to straighten his catamaran on his own for more than an hour. However, he was unhurt and the catamaran was in good shape after the incident.