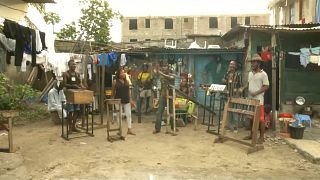 A rubbish dump in the Democratic Republic of Congo's bustling capital Kinshasa may be an odd place for most people to seek inspiration.

But for Congolese musician and founder of Fulu Muziki group, Piscko Crane, this is the perfect place to find the recycled material he will use to create his band's unique sound.

Fulu Muziki - meaning "music from the garbage" in the local Lingala language, has one special feature that makes them unique; rather than buying instruments, band members create their own from pieces of rubbish.

Using scrap metal, plastic bottles, tins or water pipes to make their instruments, the group has gained a following who love their signature rhythms and efforts to promote recycling in a country that produces over 9,000 tonnes of waste daily.

A lack of proper waste management and recycling facilities has seen Kinshasa become littered with discarded plastic bags and other waste which often blocks the city's drainage system.

Fulu Muziki says their music not only helps raise awareness on the need for recycling but also shows how much can be achieved by individuals.

Fulu Muziki may not have the solution to DR Congo's vast waste problems, but with positive message, and their hypnotic music, they are at least succeeding in raising awareness among their growing legion of loyal fans.