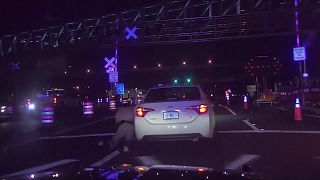 Lewis was a passenger in a car that fled a traffic stop in Orlando on Wednesday before it was forced to stop at a train crossing, Montes said.

The male driver fled on foot but returned after the train passed and attempted to get back in as Trooper Victor Rivera tried to tackle him.

Meanwhile, Lewis shifted to the driver's seat and drove off, dragging both men with the vehicle, the spokeswoman said. The original driver managed to re-enter the car, and the trooper let go.

Rivera, 29, was treated at a hospital for minor injuries, Montes said.

The driver, who is cooperating with troopers in the investigation, will be charged with fleeing an officer, resisting without violence, speeding, and driving on a revoked license, Montes said.

A juvenile who was in the back seat was charged with obstruction for lying to officials, she said.