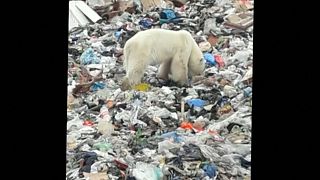 A hungry polar bear has been filmed looking for food in a Russian city far south of its normal hunting grounds.

It is more than 40 years since such a creature has been seen around Norilsk, Siberia, Anatoly Nikolaichuk, chief of the local hunting department, told Tass news agency.

Climate change has been damaging polar bears' sea-ice habitats and forced them to scavenge more for food on land, bringing them into contact with people and inhabited areas.

A state of emergency was declared in a remote inhabited area of northern Russian earlier this year when dozens of hungry polar bears were seen scavenging for food and entering public buildings and homes.