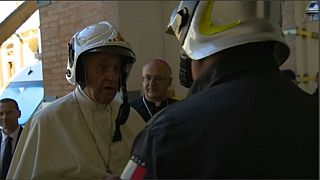 Pope Francis celebrated Holy Mass on Sunday (June 16) in Camerino, one of the central Italian towns hit by earthquakes in 2016.

He donned a white firefighter's safety helmet and entered the damaged cathedral during a visit to the region where he is giving encouragement to people still struggling three years after devastating earthquakes.

Inside the cathedral, he was surrounded by firefighters and clergymen also wearing helmets.

Francis also prayed in silence in front of the statue of the Virgin Mary, offering a bouquet of flowers to the damaged statue.

"In front of collapsed houses and buildings reduced to rubble, comes this question: what is man ever?" Pope Francis asked during the mass in Camerino, remembering the earthquakes that struck central Italy in 2016, on August 24 and again on October 30, causing the death of nearly 300 people and leaving several buildings in ruins.