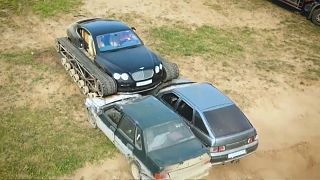 Russian roads are famous for being hard to conquer... but not when you are driving a tank.

Zarutskiy who uses his YouTube channel with 3.7 million subscribers to promote his interests in automobiles and other vehicles, says that the tracked car which he calls 'Untratank' is very easy to drive. He says driving it is not different from taking to the wheel of a usual city car and has performed plenty of off-road test drives.

Zarutskiy says there were many technical challenges with conversion of the car which took seven months. He does not reveal how much money he has spent on the spare parts, but insists the initial Bentley was the cheapest one available in Russia.

Zarutskiy's next challenge is to take his creation - which uses rubber trucks that do not harm the paving - to the streets of his home city - Saint Petersburg. So far he did not manage to receive a permission from the authorities, but hopes to adjust the car and go ahead till the end of this summer.