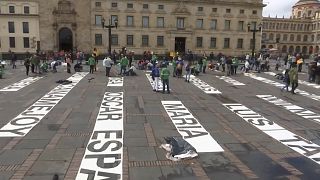 The artist Doris Salcedo directed an exhibition of public art in Bogotá in tribute to dozens of human rights leaders killed in Colombia, after the signing of the peace agreement.

The participants broke glass rectangles and then used the fragments for each of the names of 165 main activists murdered in the South American nation.

Prosecutors and human rights groups claim that up to 506 activists have been killed since the beginning of 2016. Among them are Afro-Colombian activists, indigenous leaders and human rights defenders, among others. Authorities believe that the remaining illegal armed groups and drug networks are responsible for many of the deaths.

The United Nations warned in May that the deaths of activists continue at an astonishing rate, with 51 dead in the first four months of 2019.

Salcedo has become one of the most prominent voices in Colombia, helping the nation heal through art, as it implements the peace agreement.