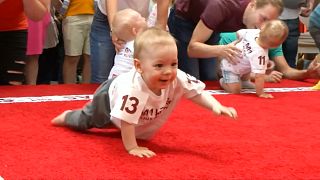 In a test of their crawling skills, 25 toddlers took part in Lithuania's annual baby racing contest on Saturday (June 1).

The event has become something of a spectator sport since it was first staged in the capital Vilnius 20 years ago.

Aged between seven months and a year, the babies competed in heats along a five-metre carpeted track.

At the finish line, parents lured them by flashing items such as TV remotes, cookies, animal toys and mobile phones.

Several toddlers lost ground following early leads after sitting down near the finish line to look around.

Some babies, startled by the crowd commotion around them, did not crawl across the starting line.

The winner Ignas Dovydaitis will be 12-months old in two weeks.