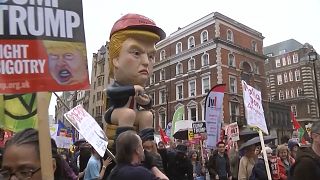 Thousands of people protested in central London on Tuesday (June 4) against U.S. President Donald Trump's pomp-laden state visit to Britain, but the numbers were far smaller than the tens of thousands who gathered to oppose his visit last year.

Protesters waved witty and sometimes rude placards at what organisers called the "Carnival of Resistance" in Trafalgar Square, while Prime Minister Theresa May was in talks with the president a short distance away in Downing Street.

The tone at the protest was set by giant robot depicting Trump sitting on a golden toilet with his trousers around his ankles, tweeting and saying: "Fake news."

The crowd, of a several thousand strong, was far smaller than the tens of thousands who protested when Trump first visited Britain as president in July 2018.