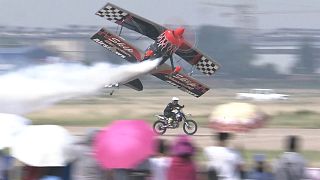 Spectacular aerobatics were on show during the first day of a special extravaganza in China.

It was all part of the 11th Air Sports Cultural Tourism Festival in Anyang City, central China, on Monday.

It included a motorbike leaping over an aircraft as it flew close to the ground.

The three-day festival will last till Wednesday.

In addition to the aerobatics show, other air sports like the drone competition and the 2019 Paragliding World Cup Tour in China will also be held.