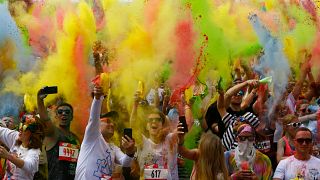 Even though the temperature was a warm 25 degrees Celsius, the heat failed to stop the participants.

This is the seventh time the colourful event has been held in the Russian capital.

"When you are running all covered in paint, (you are) so satisfied, so happy, (it's) so bright and you understand that your life is a success, that is the happiest (moment) there can be," participant Alexander Bezin told Reuters.

Roughly five-thousand people gathered in the park, and some of the participants wore masquerade costumes for the event.

"You are already out of breath, you think you cannot run anymore in such heat, and then the guys throw paint at you and it's all great again," another participant, Anton, told Reuters.

Volunteers high fived runners as they finished the race.