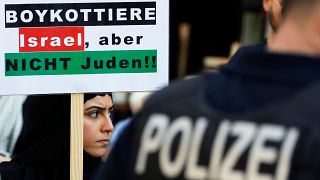 A few hundred people in Berlin took to the streets for rallies marking "Quds Day" on Saturday (June 1) in solidarity with Palestinians.

The annual event was launched by Ayatollah Ruhollah Khomeini, the leader of Iran's 1979 Islamic revolution, in support of Palestinians and is traditionally held towards the end of the Muslim fasting month of Ramadan.

The protesters held Iranian and Palestinian flags as they marched, with signs and T-shirts bearing slogans such as "Freedom for Gaza".

Iran regards Palestine as comprising all of the Jewish state - which it does not recognise - as well as the West Bank and Gaza.

Peace talks between Israel and the Palestinians collapsed in 2014.