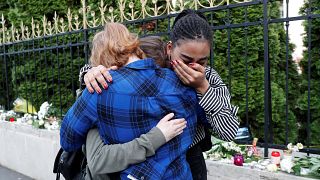 Seven South Koreans were confirmed killed and seven rescued when their pleasure boat struck a cruise liner in heavy rain on Wednesday (May 29).

Another 21 people were still missing and feared dead.

Attendees of the small memorial lit candles and tied messages to the fence of the South Korean embassy.

A crane ship was docked near the wreck in preparation for recovery operations, but divers found strong currents made it impossible for rescuers to reach the hull on Friday.