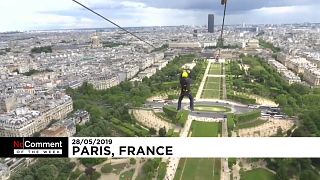 Volunteers jumped off a platform hanging 115 metres from the Eiffel Tower on Tuesday for a thrilling ride down an 800 metre zipline.

Syrian rescue workers and activists say government warplanes have again bombed the last rebel stronghold in the country, levelling a building and killing five people inside it, including three members of a single family.