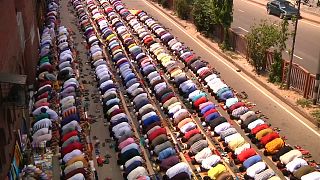 Hundreds of Bangladeshi Muslims packed one of the mosques in Dhaka to join the special prayers on the last Friday (May 31) of Ramadan.

Devotees at Sobhanbagh mosque took parts of the street due to the sheer number of people attending the Friday prayers.

Islam is Bangladesh's state religion, with over 90 percent of its total population practising the Islamic faith.

Tens of thousands of Muslims descended on the Old City of Jerusalem for the last Friday prayers of Ramadan, Islam's holiest month.

Police said one Israeli was in critical condition, while the second was in moderate condition.

Meanwhile, Palestinian worshippers who could not make it to Jerusalem prayed near a Bethlehem checkpoint after another shooting in the area was reported.

Israeli police shot and killed 16-year-old Abdullah Ghaith near the West Bank city of Bethlehem, the Palestinian Health Ministry said, adding that another 21-year-old Palestinian was wounded by a live bullet to the stomach.

Israeli police said that the Palestinian teenager was shot while attempting to climb over the heavily guarded separation barrier from Bethlehem into Jerusalem.

The police added that they were launching a probe into the incident.

The boy's father, Louai Ghaith, said his son had been trying to enter Jerusalem to pray at Al-Aqsa Mosque for the holy day.

Ghaith's body was brought to a Bethlehem hospital, where his distraught family identified him.

Women of all ages can enter for the occasion, as well as men over the age of 40 who undergo a background check.

Younger Palestinian men must request an entry permit from the military, which is difficult to obtain.