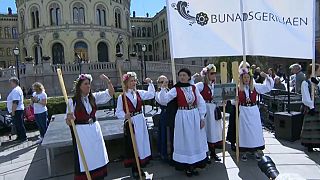 Several hundred women dressed in bunad (Norwegian traditional clothes) met up in Oslo to protest against the closure of several small birthing centres around the country.

They marched through the streets of the capital and ended up in front of the Parliament.

In 1975, there were 95 centres of which only 45 are left. The demonstrators were voicing their concerns about the risk of children dying during or after childbirth.