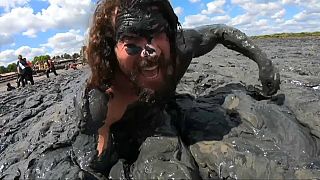 The race, which was first held in 1973 in the coastal town of Maldon, 50km north-east of London, attracts entrants from across Europe. Competitors wade through the mud of the River Blackwater at low tide in fancy dress to raise money for charity, although at least one found himself without his costume at the finish line.

Christopher Lee was the first man home, with Shannon Rowsell the first woman.