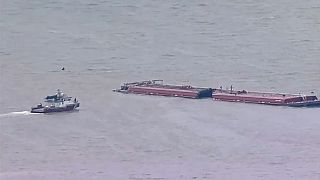 Multiple vessels collided in the Houston Ship Channel on Friday afternoon, spilling an unknown volume of a toxic gasoline product and forcing the partial closure of the commercial waterway.

A 755-foot (230 metres) tanker collided with a tugboat pushing two barges near Bayport, Texas, around 3:30 p.m. (10:30 CEST), capsizing one of the barges and damaging another, authorities said.

The U.S. Coast Guard has set up an incident command and reported no injuries Friday night.

Each barge was carrying an estimated 25,000 barrels of reformate, and the Coast Guard said in a statement that an unknown volume of the gasoline product spilled.

Reformate is colourless, flammable and toxic to touch, inhale or ingest.

Fire and oil spill response boats were at the site of the collision, and air monitoring was being conducted along the shoreline.