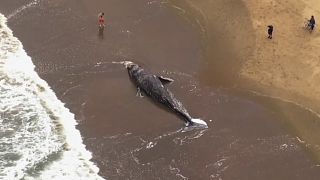 The whale also seemed in poor shape, its insulating layer of blubber was thinner than usual.

It's the ninth whale found dead in the San Francisco Bay Area since March.

They added that some greys are in poor condition during this year's annual migration from Mexico to Alaska. They suspect some are having trouble finding food as warming ocean conditions cause changes in their food supplies.