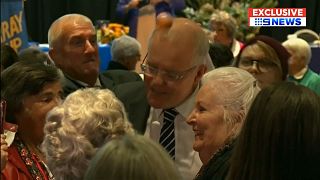 A woman who struck Australian Prime Minister Scott Morrison with an egg as he campaigned for votes has been charged with assault, police said.

Security guards pounced on the Amber Holt, 24, and dragged her away moments after the attack. She was released on bail and will appear in court later this month.

Morrison rubbed his head briefly after being grazed by the egg, which did not break, and then helped an elderly woman who was pushed to the floor in the scuffle.

Australia will go to the polls on May 18.