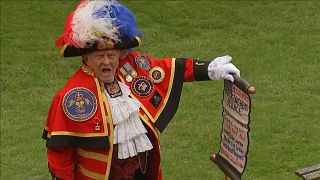 An unofficial town crier in Windsor, UK, announced the news that Meghan Markle, the Duchess of Sussex and wife of Britain's Prince Harry, had given birth to a baby boy weighing 3.26kg.

The bellman ended his announcement of the royal birth by adding, "God bless America, and God save the Queen" having ad-libbed the phrase: "Well done Meghan!"

The baby, seventh-in-line to the British throne, "is absolutely to die for", Prince Harry told reporters earlier.

In a formal announcement on their official Instagram account, the royal couple said they "welcomed their firstborn child in the early morning on May 6th, 2019."

Queen Elizabeth's grandson Harry, 34, and Meghan, 37, a US-born former actress, married in a lavish ceremony at the monarch's Windsor Castle home in May last year.

The baby will be the eighth great-grandchild of the 93-year-old queen, the world's longest-reigning monarch, and could be entitled to hold joint British and American citizenship according to nationality rules.