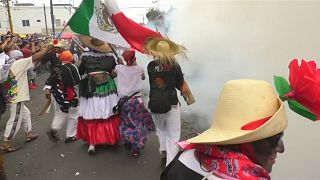 Residents of the Penon de los Banos neighbourhood of Mexico City re-enacted on Sunday (May 5) the victory of the Mexican army over the French 155 years ago popularly known as Cinco de Mayo.

In the local spectacular, families line the streets to watch residents dressed in period costume act march on streets to represent Mexican and French troops preparing for battle. Real guns are used as well as model canons to dramatise the battle.

Cinco de Mayo marks the Battle of Puebla that took place on May 5, 1862 when Mexican forces overcame Napoleon Bonaparte's encroaching French army. It has evolved over the decades and today stands as a symbol of Mexican unity and patriotism.

Mexico's actual Independence Day is celebrated on September 16, marking the beginning of Mexico's 1810-1821 war of independence from Spain.