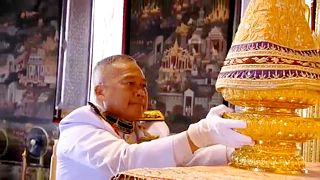 This weekend, Thailand celebrates the coronation of King Maha Vajiralongkorn, also known as Rama X, two years after having ascended to the throne after the death of his father.

A gold plaque with an inscription in the name, title and horoscope of the King was brought to the Grand Palace in Bangkok on Friday.

The ceremony, which will last three days, is a historic moment for Thailand. The monarchy is considered the spiritual protector of the people and the mandates, particularly among the older generations, a reverence similar to the deity.