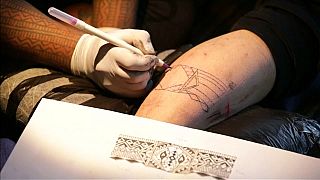 Tattoos made with ancestral techniques

The artist Cudjuy Patjires wanted to rescue the tattoo technique used by the Paiwan tribe, the second largest indigenous group in Taiwan

The traditional culture of indigenous tattoos in Taiwan had almost disappeared after decades of being banned by the first Japanese colonists and later by the Chinese nationalist government.

The art of hand tattoos still persists in some indigenous cultures in Samoa, the Philippines, Hawaii and other islands in the Pacific.