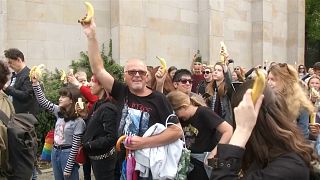 Around 1,000 people, many eating bananas to make their point, protested in front of Warsaw's National Museum on Monday (April 29) over a decision last week to remove artworks deemed "indecent" by the museum's director.

One work, a 1973 video "Consumer Art" by Polish artist Natalia LL and stills from the video, show a woman eating a banana in sometimes lascivious poses. Only the video was removed on Friday (April 26) according to the museum's officials.

The museum also removed an installation by artist Katarzyna Kozyra depicting a woman walking two men dressed up as animals on a leash.

The museum's director, Jerzy Miziolek, asked to have the artworks removed last Friday, saying that "certain topics related to gender shouldn't be explicitly shown", according to Polish newspaper Gazeta Wyborcza.

The museum has since promised to reinstate the artwork, but the protests went ahead anyway.

Protesters ate their way through hundreds of bananas and waved them in the air chanting "Banana Republic".

A number of Polish actors and politicians have posted images of themselves eating bananas on social media, using hashtags like #jesuisbanan and #bananagate to protest what they called censorship by the museum and Culture Ministry.

The controversy follows criticism of the culture ministry and of the ruling conservative Law and Justice (PiS) government for interfering in decisions on who heads cultural institutions such as theatres and museums since taking power in 2015.