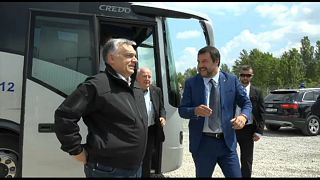 Italian Interior Minister Matteo Salvini took a helicopter from Budapest during his visit to Hungary on Thursday (May 2) to visit Prime Minister Viktor Orban at the fence on the country's southern border with Serbia.

In a video taken during his flight and posted on his Facebook page, Salvini said the fence was built to block illegal migration and that entry into Europe was only possible with permission.

Another video showed Salvini and Orban embracing and touring a stretch of the border fence together.

During the 2015 crisis, migrants tried to travel from Greece through Macedonia and Serbia to EU member Hungary, until this route was sealed by border guards and fences.

Tens of thousands of refugees and migrants, mainly from Syria, Iraq and Afghanistan, are stuck in Greece from when Balkan countries shut their borders in 2016.