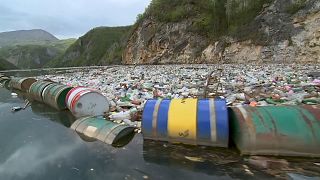 Bosnian rivers, once crystal clear, now full of rubbish due to neglect

Plastic bottles, rusty barrels and even old washing machines are among tonnes of garbage clogging rivers in Bosnia that were once famous for their emerald colour and crystal-clear waters.

At the Drina river, which flows between Montenegro, Serbia and Bosnia, tons of garbage is stuck near a key hydro power plant, forming huge islands that float on the surface.

Locals say as much as 800,000 tonnes are pulled out of the Drina each year.

In the whole region of Drina, there are no recycling companies, therefore the plastic and other trash that is dumped in the river stays there and forms river flow blockades.

The environment ministers of Bosnia, Serbia and Montenegro met at the site in April, promising to work together to solve the problem.

Neglected during the wars and crisis in the 1990s, the waste-management problem has grown over the years, reaching alarming proportions in a region where joblessness and poverty are widespread and where corruption routinely stalls implementation of reform laws.

Activists and residents have little faith that an improvement will happen anytime soon as effective waste management requires years of planning and huge investment.