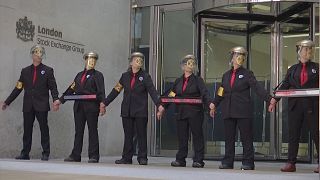 Environmental activists blocked the entrance to the London Stock Exchange in the final day of protests aimed at pushing the UK to act faster to avert what they claim will be catastrophic climate change.

Six protesters, dressed in black suits and red ties, created a human barrier in front of the building's revolving doors on Thursday morning.

They held signs reading: "Tell the truth" and "Act now".

The Extinction Rebellion group has caused mass disruption in recent weeks across London, blocking Marble Arch, Oxford Circus and Waterloo Bridge, smashing a door at the Shell building and shocking lawmakers with a semi-nude protest in parliament.