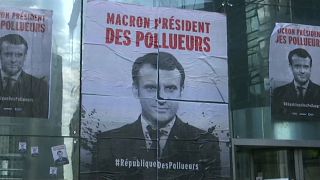 Greenpeace said it was protesting against the companies links to the oil and gas industry, which the group says is a driving force in global warming.

They plastered giant posters of President Emmanuel Macron carrying the slogan "Macron, President of Polluters" and a banner reading "Scene of Climate Crime" on the glass facade of Societe Generale,

Police pepper-sprayed one group blocking the bank's main entrance in a sit-down protest.

Some protesters taped themselves together while others cuffed themselves with plastic ties to metal poles to make it harder for police to dislodge them.