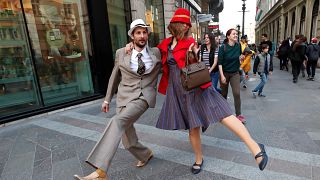 Benedek Petrok, a 27-year-old education assistant who organised the march, said the event provided an opportunity for people to forget about their daily problems.

Participants, including old and young alike, held a one-minute warm-up session before setting off for a three-lap march near an underground station in the neighbourhood of expensive hotels in central Budapest.

The sketch by the Monty Python team, who made their name in a 1970s television series, shows British actor and comedian John Cleese as a civil servant walking in unusual ways to the "Ministry of Silly Walks."