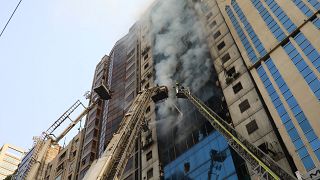 A fire in a high-rise office building in Bangladesh's capital on Thursday killed at least 25 people, officials said.

Many people were trapped inside the building, but fire officials said after battling the blaze for several hours that most had been rescued.

People were seen shattering the building's glass windows to ask for help.

Saikot Ahmed, who worked in the building, said the blaze started either on the 6th or the 7th floor. He escaped the fire by running down the stairs.

Military helicopters joined the rescue operation, and one person dangled from a helicopter hovering over the roof as thick plumes of smoke rose.