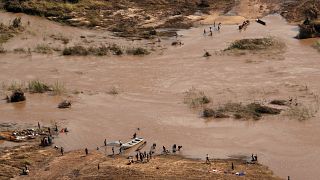 Large crowds of people waited for treatment at medical centres in the central districts of the Mozambique city of Beira on Tuesday (March 26) as the government made preparations for a cholera outbreak that it says is inevitable amid the devastation left by Cyclone Idai.

Nurses wearing face masks distributed chlorinated concentrate which will act as a temporary solution to prevent waterborne diseases among the local population after the mass flooding.

Gert Verdonck, an emergency coordinator with the aid group Doctors Without Borders, said an epidemic could spread quickly due to Beira's dense population.

Water has been slowly receding and there was no rain in Beira on Monday (March 25), meaning some roads have become passable. But the size of the disaster zone means getting aid to the neediest is still difficult.